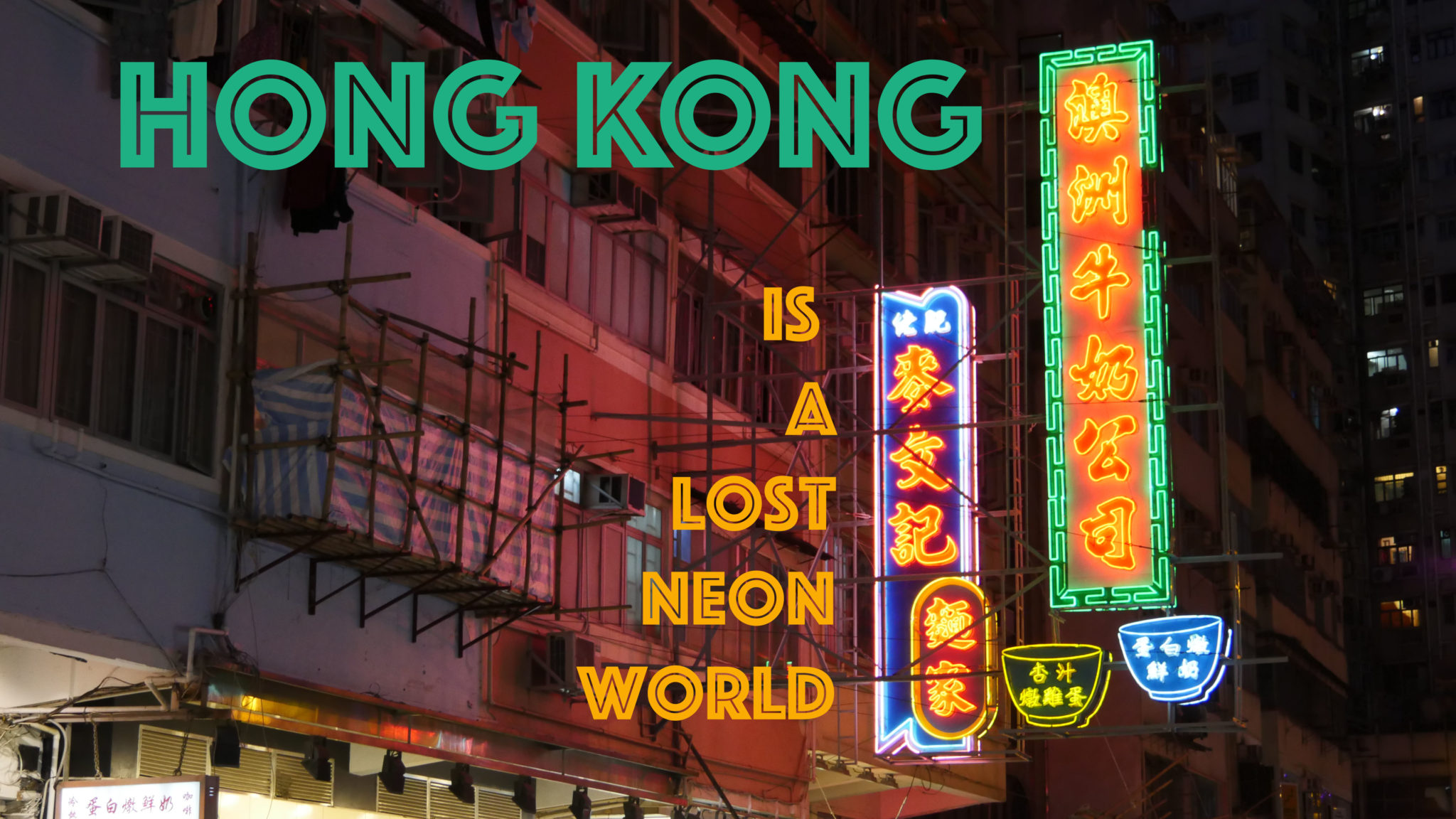 The garish light of Hong Kong’s neon signs became synonymous with its image as a city built upon a mix of East/West cultures, Cantonese tradition and new technology. Now, these famous neon lights are finding a new home inside its many bars and clubs as the noble gas slowly fades as a source of illumination for the edgy streets that have long basked in their glow.

Neon-lit signs once spruced up the night to advertise Hong Kong’s dumpling dives, foot massage parlors, and camera shops and a gaudy nightlife scene from the romping grounds of raunchy sailors in Wan Chai to Kowloon saunas. It emanated a unique spectrum of lurid colors, and became a showcase of the city’s traditional Chinese calligraphy and the creativity and humor of its shop owners. 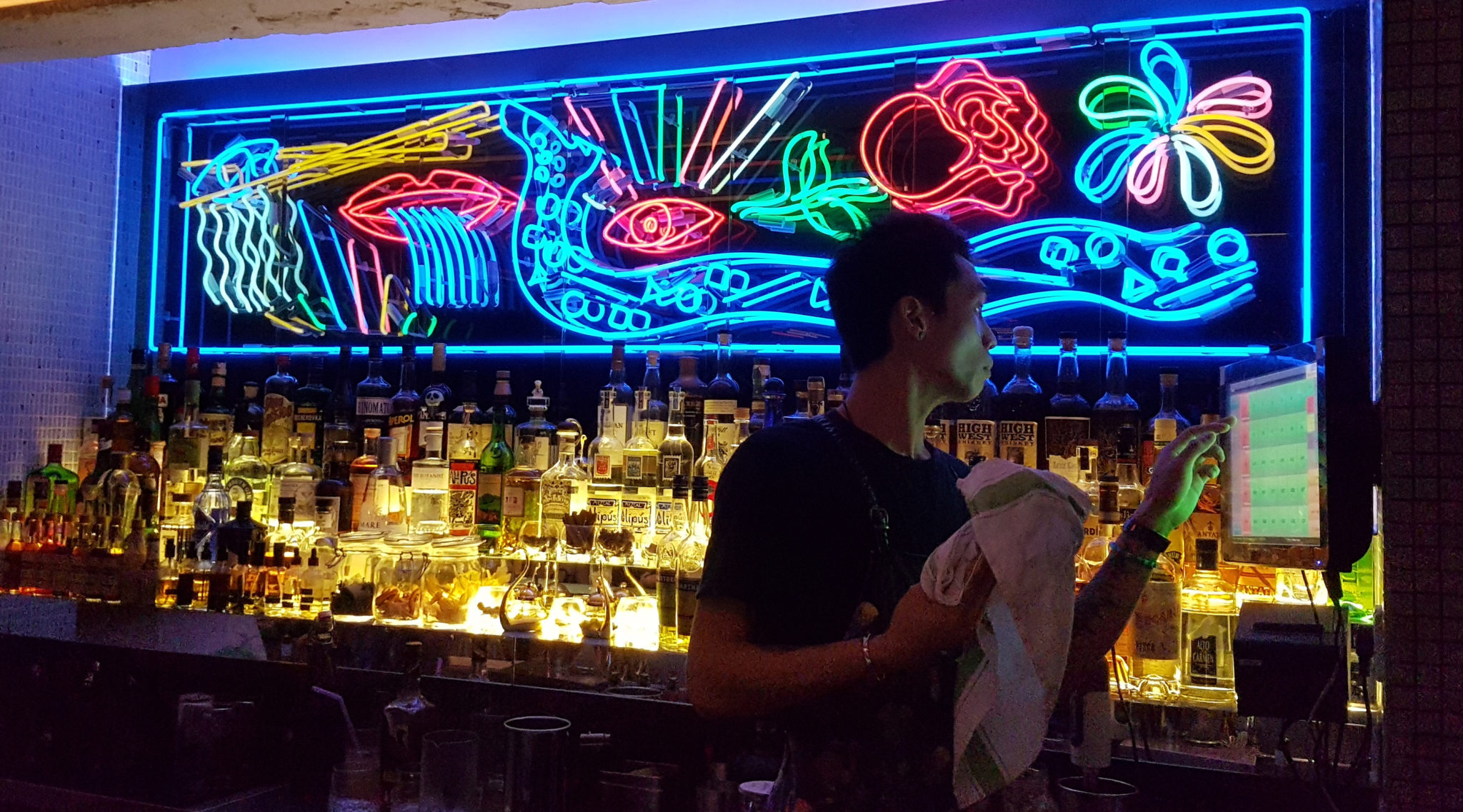 Today, Hong Kong’s neon world is approaching endangered status. It is a casualty in one of history’s fastest technological revolutions: the rise of light-emitting diodes, or LEDs. One of the foremost photographers of the city’s neon says three-quarters of the thousands of signs he shot are no longer.

But neon, which has been in decline since the invention of LEDs in 1997, may be having a rebound as establishments from Sai Ying Pun hipster bar Ping Pong to the gargantuan Center building offer new ways to use the technology.

“Neon adds a lot of color,” said Chanel Adams, head bartender at Happy Paradise, a Guangdong stir-fry restaurant and cocktail bar in Central that opened this year. “We had to use dimmers to wrap around the neon because it was initially blinding in here.”  The trippy neon bar design features a lime waterfall cascading from bright red lips.

Last of the neon masters

Wu Chi-kai, 50, is one of a handful of neon masters still doing business in Hong Kong. He says that his sales have dropped by more than half since his heyday in the 80s and early 90s, when he’d work 16-hour days and sleep at the factory for as long as a week.

It’s been a long journey for the son of a shopfitter whose father only wanted him to have a safe job that didn’t involve swinging from bamboo scaffolding and precariously perched ladders.

Was it the coming of LED technology and its low-maintenance, low-cost appeal? Or was it something more complicated?Wu Chi-kai talks through the  changes in the industry he has witnessed, and how it affected Hong Kong’s streetscape and skyline.

Can neon make a comeback?

Having seen his industry fade, Wu Chi-kai is witnessing a return to neon from new clients, and there’s a new kind of apprentice in his workshop. Invited by the Lumiere festival to run neon making workshops for a generation raised by the light of mobile phones and plasma screens, could this be the moment his industry enjoys a comeback?

The photographer who reflected Hong Kong’s light to the world

Neon buffs say LEDs represent a less tasteful, more utilitarian need for brightness. Photographer Keith Macgregor took thousands of photos of neon over a 50-year career, from depictions of pink sauna bathers floating in blue waves to intricate Chinese dragons and one curious advert for La Bamba nightclub that features a depiction of a glowing Dick Tracy figure. Those photos would became iconic postcards sent around the world, capturing both a culture and an era.“It created a kind of atmosphere,” the former Hong Kong resident said, sighing.  He displayed his photo of a shop that advertised itself in LED as “Frisky Cafe” and quickly noted its lack of dimension. “That’s not frisky at all. LED has just got no depth. It’s flat.” One of his best-sellers (pictured above and below) is his montage Neon Fantasy, created from a multitude of neon signs from around Hong Kong, placed along two of the city’s bustling streets.
Macgregor, who donated some of his shots to M+, Hong Kong’s museum for visual culture in the West Kowloon Cultural District, wants neon culture to live on.

Stills from Ghost in the Shell, Bladerunner and Double Impact

“Neon is the energy of Hong Kong,” said Christopher Doyle, an Australian cinematographer in a short film recently produced on the West Kowloon Cultural District’s website neonsigns.hk.  “It’s the excitement of the encounters on the street…It’s a garish, exuberant, possibly empty world if you’re not careful.”

Hong Kong’s neon has seeped through into popular culture, becoming the inspiration for films from Blade Runner to A Ghost In the Shell and Playstation 3 game Double Dragon Neon. Doyle, who collaborated with award-winning director Wong Kar Wai on Hong Kong movies including In the Mood for Love and Chungking Express said neon isn’t done with Hong Kong.

“It will come back, don’t worry — It’s like film, it’s like polaroid cameras,” he said “It actually elevates itself by being rare. And it is rare because it’s a gas. It’s a gas inside a tube.” 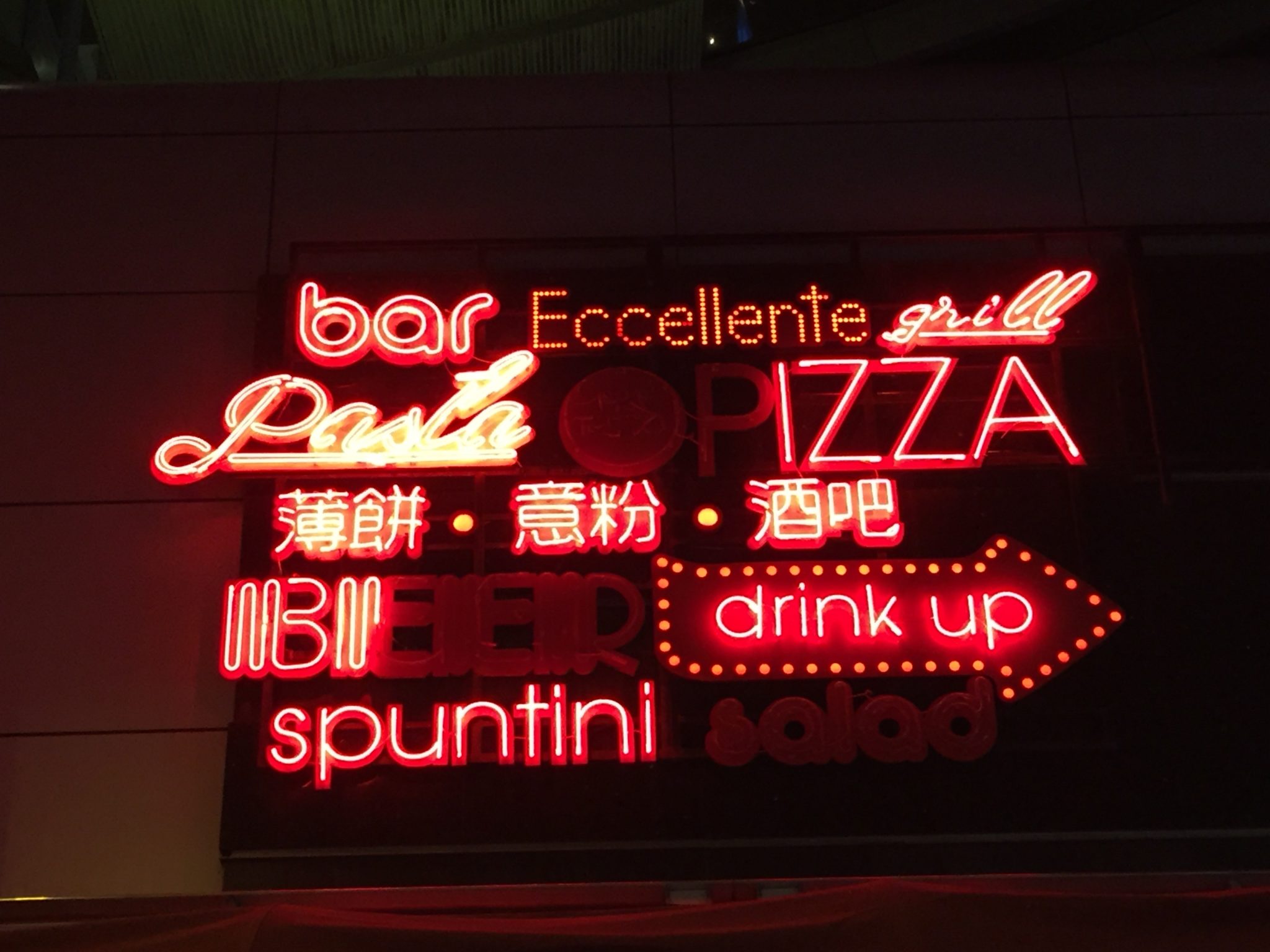